What do you do to entertain a class of sixth years who reckon they have earned the right to not work in their final week?
Today I introduced them to the intriguing character of Nikola Tesla

It seemed to go down well. 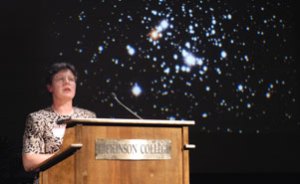 Tomorrow I’m hoping to try getting them to listen to a podcast; in this case it’s an RTE interview with Jocelyn Bell Burnell, an equally intruiging character but for a whole lot of different reasons. She discovered the Pulsar, a rotating neutron star, and should have received a Nobel prize for her work but instead it went to her supervisor. Instead of being bitter she is remarkable sanguine about the whole matter.

Oh, by the way, she’s Irish. So why is this not on the syllabus?

The proram is part of the Icons of Irish Science series, which was first broadcast in 2005, and is well worth listening to.