This is an image, courtesy of Wordle.net, of the current Leaving Certificate Physics syllabus. Wordle is a program that gives the most common words the largest font size: 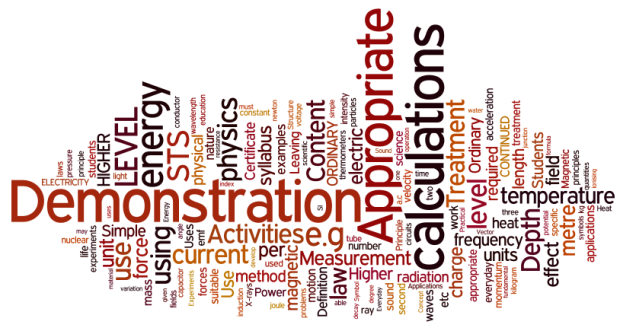 This is a similar image of the proposed new syllabus. 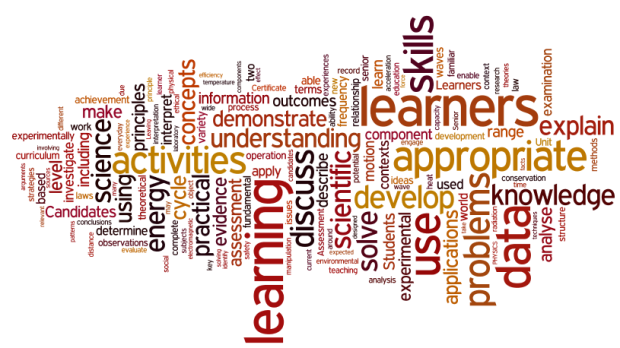 Notice the new focus on the words ‘learners’ and ‘learning’.

Imagine if a syllabus had as its most common words the following:

If any of this was a priority then chances are that Particle Physics wouldn’t have been removed (and with it Pair Annihilation, Anti-matter, Neutrinos, Fundamental Forces, etc.).

science.ie is currently hosting a survey of readers to find out what they consider to be the greatest mystery in Science. The leader by quite some way is “How did the universe begin?”

The theme for this year’s Science Week is “Our place in space“, and no doubt thousands of students will spend an hour or two attending special lectures which highlight this wonderful concept.

Then we all go back to our classrooms and never again hear about space, never mind the Big Bang.

If we want to grab students and hold onto them then while ScienceWeek is a nice resource, it is certainly not the answer. Why are we not telling students about the Big Bang, Quasars, Neutron Stars, Pulsars, Black Holes and all manner of other exotic phenomena as part of their science education? Because it’s not on either the Junior Science or Leaving Cert Physics syllabus (although the Big Bang does make an appearance in the Leaving Cert Religion syllabus).
And it’s never going to be on these syllabi unless we kick up a fuss. For that to happen there would first need to be a recognition of the problem. Why can’t Chris Horn and all those other commentators from the business world take an hour or two to look at our syllabi and then ask themselves – ‘would I want to study this for either three or six years?’

I don’t know if other teachers feel the same because there is so little communication between us, but that bone of contention is for another day.

This is just to serve as advance notice – next time you hear an ‘expert’ on the national airwaves bemoaning the low numbers of students taking up Physics or Chemistry, listen our to see if there is any evidence to indicate that the speaker is actually familiar with either syllabus. And listen very carefully for the one word that never gets mentioned by these business folk: wonder.

What do you do to entertain a class of sixth years who reckon they have earned the right to not work in their final week?
Today I introduced them to the intriguing character of Nikola Tesla

It seemed to go down well.

Tomorrow I’m hoping to try getting them to listen to a podcast; in this case it’s an RTE interview with Jocelyn Bell Burnell, an equally intruiging character but for a whole lot of different reasons. She discovered the Pulsar, a rotating neutron star, and should have received a Nobel prize for her work but instead it went to her supervisor. Instead of being bitter she is remarkable sanguine about the whole matter.

Oh, by the way, she’s Irish. So why is this not on the syllabus?

The proram is part of the Icons of Irish Science series, which was first broadcast in 2005, and is well worth listening to.

The nice thing about Global Warming is that it that it may very well wipe us out as a species in the next couple of hundred years.
It is the single greatest catastrophe to hit human-kind EVER.

And in the grand scheme of things we couldn’t say we didn’t deserve it, or that we haven’t been warned.

Because it’s effects are not affecting us directly at this moment in time we just choose to bury our heads in the sand.
It’s like the story of the frog in the pot:
If you throw a frog into a pot of boiling water, it will jump out instantly.
Yet, if you were to place it in a pot of cool water and slowly raise the temperature to boiling point, the frog will unsuspectingly meet its fatal demise.

You want to know what the Junior Cert Science syllabus has to say about this calamity?
Consider the following.
Junior Cert Biology:
Consider and discuss how human activity affects the environment, both positively and negatively (two examples in each case).

Actually scratch that last one.
Apparently we only need to look at energy in terms of out national energy needs, not in terms of the fact that we are the single worst thing to ever happen this planet.
So that’s allright then.

So how about the Leaving Cert?
Well let’s see.
There’s nothing in Biology (hopefully somebody will prove me wrong here) and nothing in Leaving Cert Physics.
Leaving Cert Chemistry does go into it in some detail (for the small percentage of students who do it at this level):
The greenhouse effect and the influence of human activity on it,
and later;
Possible implications of the increased greenhouse effect.

Well here’s one Possible effect of the greenhouse effect for you;
Your children may very well be the last generation to live what we now regard as a ‘normal’ life, and it may very well be too late for us to do anything about it now even if we did want to.
And let’s face it; with the current demand for chelsea tractors in this country, anything we do will amount to little more than lip-service.

And we can’t even say we didn’t deserve it.

Okay, let’s get one thing straight.
The greatest single idea that mankind has ever – and I mean ever – come up with is The Theory of Evolution.
It is the greatest idea in the history of the universe, and even comes ahead of the idea of the origin of the universe itself. And I say this as a physics graduate.
It’s not on the Junior Cert Science syllabus.
see for yourself

Now I do believe there is a general outcry that not enough students are taking science subjects at Leaving Cert level, and indeed this revised syllabus was designed partly to address this.
Indeed the ‘Introduction and Rationale’ section of the syllabus states:
“Arising out of their experiences in the junior cycle, it is hoped that many students will be encouraged to study one of the subjects in the senior cycle, thus preparing themselves for further study or work in this area”.

So why would you leave out the most incredible, stupendous, unbelievable (almost!), bizarre, wonderful, horrible, exciting, humbling, uplifting, emotional and awe-inspiring idea that the students could ever possible come across in thier lives, never mind in their school experience?

And here’s the kick.
Every so often the media here grab hold of the fact that the U.S. education system is having difficultity keeping evolution in their syllabus, and we think to ourselves “oh those silly yanks”.
Meanwhile we remain in ignorant bliss that we never had it on our syllabus in the first place.
Of course, the percentage of the school-going public that take Biology at leaving cert level do come across this, but for the rest of us there is nothing.
At least not in their science education.

Interestingly, while I don’t see a mention of it in the Junior Cert Religion syllabus (now there’s another missed opportunity! Imagine being able to make religion interesting?), it does make an appearance in the Leaving Cert Religion syllabus (check it out here – it’s first mentioned on page 103 of 110 in the pdf document).
Here’s part of what it says:
“Outline Darwin’s Theory of Evolution and highlight the major areas of conflict with religion”
Now there’s one to get your teeth into.

This section also delves into the origins of the universe, along with concepts like Heisenberg’s uncertainty principle. I reckon there’ll be some serious nervous religion teachers going in to class that day.

The fact that there’s nothing about The Big Bang or Origin of the Universe in the Junior Cert or Leaving Cert physics syllabus is for another day . . .