It ain’t what we don’t know that gives us trouble, it’s what we know that ain’t so.”
Will Rogers

A common failing in all levels of science education is mistaking having a word for a phenomenon with having an understanding of it.

To take a very simple example, if I ask any of my students why the apple falls ‘down’ from the tree they will all say ‘because of gravity’.

If I then ask them what ‘gravity’ is I get a lot of mumbled responses before they finally acknowledge that they have to idea.

Or I could pose the following:
My book is sitting on the table. There is a force of gravity acting on it pulling it downwards.
The fact that it doesn’t fall downwards must mean that there is another equal force acting upwards.
So, I ask, what is this force?
“That’s easy”, say the troops, “it’s the table.”

It gets better. Let’s assume that the weight of the book is one Newton.
Whatever is acting upwards (opposing the gravitational force) must therefore also be one Newton.
Now if I put a heavier book on the table (two Newtons in weight) the table now needs to push back upwards with an equal force of two Newtons. How come the table ‘knows’ exactly the right amount of force to push up with?

What happens if it got its sums wrong and pushed up with a force of three Newtons when it should have just pushed with two Newtons?
Hmmm . . . 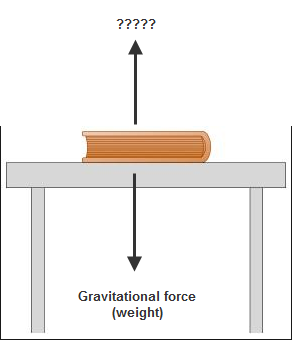 In our Physics and Applied Maths classes we do lots of calculations with this upward force. And because we talk about it so much we gave it a name. It’s called a “reaction” force, signified by the letter R (because we’re nothing if not imaginative).
I use this as an opportunity to predict the future career path of the students in front of me. Engineers are perfectly happy not to know anything about the origin of this reaction force. I just need to get out out of their way while they get on with the business of using it to get the right answer.
The physicist is the guy/gal who knows there is something odd about all this and isn’t happy until they get to the bottom of it.
The dilemma I constantly struggle with is the following: how much time should I spend  trying to unravel students’ misconceptions in order to give them a deeper understanding of the basic concepts when the exam is just looking for superficial answers.

So more and more I put my emphasis on the wonder of the subject. Because that’s what drew me into it in the first place, and then gradually I sorted out some of these issues myself. But I still still struggle with most of them. But it’s a wonderful struggle.

So don’t worry if students at any age don’t have a fully-worked out understanding of what’s happening. Once they’re happy to ask questions, and the environment is there to encourage this, everything else will follow in its own good time.

At least that’s what I think.

I could well be in a minority of one . . 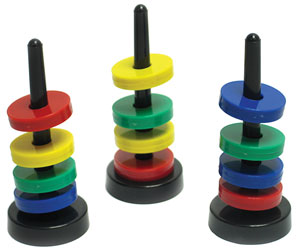 Sometimes the most basic question can be the hardest to answer. “How do magnets work?” is one such question. If you’re a teacher like me you’ll probably end up using fancy terms like “North and South Poles” and “Opposite Poles Attract”, and may even go on to demonstrate it using the floating magnets above.

Or if it’s a senior class you might talk about the material having “Magnetic Domains” which are usually randomly oriently but in a magnet are all lined up parallel.
And this invaribly works.
But there’s usually one student (quite often it’s someone who is not great academically, and consequently may remain in the background for much of the time) who’s not happy with this.

But how does one magnet know that the other magnet is there?

And that, my friends, is a great moment. It means that at least one person in my class managed to avoid all the ‘education’ that I stuff down their throats, and maintained his ability to think for himself. ‘Course that won’t help him (or her) much when it comes to exam time, but at least in my mind it counts for a lot.

A former student once sent me a card on which he wrote “Thanks sir, I was in your class for two years and in that time I learnt nothing”. It was one of the nicer compliments I have received. Cheers Luke.

I hope to be teaching more Junior Cert Science this year and need to remember to avoid the temptation of throwing in jargon as a substitute for deeper explanations. For that matter, when the apple falls from the tree how does it ‘know’ which way is down?

Or here’s one for leaving cert students: why is the charge of a proton (which is composed of three quarks) the same as the charge of an electron if they are completely seperate particles?

Here’s a lovely article taken from the  science magazine Discover detailing how the author realises that nobody actually understands how magnetism works.

As teachers, we need to become comfortable discussing the limitations of what we know.