The following is an edited extract from notes which I give to students before going through the derivation for the rather intimidating equation below.

Congratulations
You have just arrived at an equation which bookmarks a seminal moment in the history of science.

Around this time (16th century) an astronomer called Johannes Kepler discovered empirically (i.e. by analyzing data on the motion of planets) that the square of the periodic time of these planets (time for one complete orbit around the sun) is proportional to the cube of their distance from the sun.
Kepler actually stole the necessary data from a colleague, Tycho Brahe, but that’s nothing new in the world of Science. We will conveniently ignore that for now.

Later on Newton came along and was able to demonstrate this relationship mathematically, by combining a well known equation for circular motion on Earth with his own universal law of gravitation. We are about to follow in his footsteps and see exactly what he did and how he did it. Do not under-estimate the importance of this exercise (yes you have to know it for exam purposes, but that’s not why I consider it important).

This event had two very important consequences.
1. It showed that Newton’s Law of Gravitation must be valid in its own right, which was very important in securing Newton’s reputation as a giant of science, both at the time and for posterity.
2. Even more importantly, it demonstrated that ‘the heavens’ followed the same rules of science as those which operated here on Earth.
This meant that they were a legitimate area of study, and so Astronomy (which in turn led to Cosmology) was given an added respectability. Just to give a sense of what people believed at the time, Kepler had to spend much of his time during this period defending his mother of charges of being a witch.

I can think of no modern discovery which compares with this. Even if we discovered life on Mars it really wouldn’t be that big a deal. For up to this point the heavens were considered off-limits – the realm of God or the gods or whatever you’re into yourself. But now they could be shown to be just another series of objects which followed set rules, much like cogs in a complicated clock. So God was being pushed into the wings. You could see why neither Martin Luther or the Vatican Church would have been keen fans.

Kepler was following on the work of Nicolas Copernicus (known to science students down the ages as ‘copper knickers’), who in turned showed that the Earth revolved around the Sun, not the other way around.
Galileo’s run in with the Church was because he supported Copernicus’ view, so Galileo never actually made that discovery but was happy to use it to make fun of the church authority figures of the time. I think we all know how that worked out for him.

This was really the dawn of science, and progress was hindered by medieval views of the astronomers themselves. It took Kepler many years to realise that the orbit of the planets was elliptical in nature, not circular. He had assumed initially that the motion had to be circular because a circle was a perfect shape (harping back to the teachings  of Pythagoras and Aristotle, among others) and therefore would have been more pleasing to God who obviously had created the planets in the first place.

Similarly Newton, despite being heralded as one of our greatest ever scientists, spend up to 90% of his time trying to date the creation of Earth by tracing who gave birth to who in the bible.

But then Newton had another problem. He realised that Kepler was correct in stating that the planets traced out elliptical orbits, but even Newton’s equations didn’t fully match the path of the heavenly bodies; according to Newton’s equations the planets should slowly but exonerably drift from their current pathways. He couldn’t figure out why this didn’t happen – after all, his equations seemed to be perfect in every other way. And Newton believed that he was getting his ideas directly from God. Which doesn’t leave much room for admitting you made a mistake.

We now know that while Newton’s equations are very accurate, we actually need Einstein’s Theory of General Relativity to explain why they don’t precisely describe the motion of the planets.
It’s interesting to note that Newton’s explanation was that God must step in every so often to gently nudge the planets back into their preferred orbits. Now as you now know, invoking a deity to explain discrepancies in scientific observations is the antithesis of Science. So perhaps Newton wasn’t actually so mighty after all. This is partly why he is sometimes referred to as the last sorcerer rather than the first scientist.

So now we’re up to Einstein. His general theory of relativity suggested that the universe was expanding, but just like all of his predecessors he was a man of his time, and this coloured how he saw the world. It was believed at the time that the universe had always been the way it is now (this is referred to as the ‘Steady State’ theory). Einstein figured that there must be some mistake in his paper so he introduced what he called a ‘cosmological constant’ which basically amounted to a fudge factor which altered the implications of his calculations and prevented the universe from expanding.

Which was all very well until Hubble (he of the ‘Hubble’ telescope) showed that the universe was actually expanding after all.

Doh!
Einstein referred to this as his greatest ever blunder.

So there you have it. This has been my attempt to put some context on the derivation that we are about to carry out. It is our chance to repeat one of the greatest moments in the history of science.

So you have two options; you can consider this exercise to be a pain in the ass or you consider it an incredible privilege to be in a position where you can follow in the footsteps of giants.

I think we know which option I go with.

And don’t be afraid to tell your parents this tonight; they may well throw their eyes up to heaven but if they do that’s a slight on them – not on you. 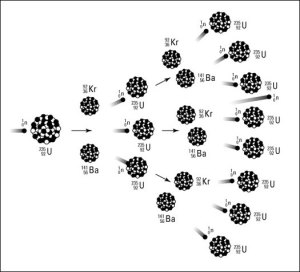 Cockroft and Walton experiment; Artificial splitting of the atom, as published in Nature:

The brightness of the scintillations and the density of the tracks observed in the expansion chamber suggest that the particles are normal a-particles. If this point of view turns out to be correct, it seems not unlikely that the lithium isotope of mass 7 occasionally captures a proton and the resulting nucleus of mass 8 breaks into two a-particles, each of mass four and each with an energy of about eight million electron volts. The evolution of energy on this view is about sixteen million electron volts per disintegration, agreeing approximately with that to be expected from the decrease of atomic mass involved in such a disintegration.

Experiments are in progress to determine the effect on other elements when bombarded by a stream of swift protons and other particles.

COMPTON: We entered the balcony at one end of the room. On the balcony a dozen scientists were watching the instruments and handling the controls. Across the room was a large cubical pile of graphite and uranium blocks in which we hoped the atomic chain reaction would develop. Inserted into openings in this pile of blocks were control and safety rods. After a few preliminary tests, Fermi gave the order to withdraw the control rod another foot. We knew that that was going to be the real test. The geiger counters registering the neutrons from the reactor began to click faster and faster till their sound became a rattle. The reaction grew until there might be danger from the radiation up on the platform where we were standing. “Throw in the safety rods,” came Fermi’s order. The rattle of the counters fell to a slow series of clicks. For the first time, atomic power had been released. It had been controlled and stopped. Somebody handed Fermi a bottle of Italian wine and a little cheer went up. One of the things that I shall not forget is the expressions on the faces of some of the men. There was Fermi’s face—one saw in him no sign of elation. The experiment had worked just as he had expected and that was that. But I remember best of all the face of Crawford Greenewalt. His eyes were shining. He had seen a miracle, and a miracle it was indeed. The dawn of a new age. As we walked back across the campus, he talked of his vision: endless supplies of power to turn the wheels of industry, new research techniques that would enrich the life of man, vast new possibilities yet hidden.