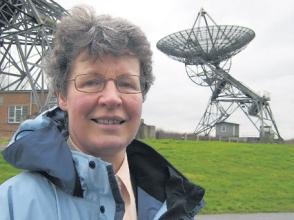 I don’t imagine many people picked up on it, but it was a little embarrassing to hear both of the presenters mis-pronounce the name of one of Ireland’s most famous scientists at the presentation of the Young Scientist awards last Saturday.

Jocelyn Bell Burnell made one of the most important discoveries in Cosmology EVER in 1967 when she discovered the first pulsar (pulsating radio star).
Imagine a star which has the mass of the Sun, but only the size of the Earth, which rotates not once in 24 hours like our Earth, but ONCE EVERY SECOND. That’s what Bell Burnell discovered.
Since then pulsars have been discovered which rotate almost ONE THOUSAND TIMES EVERY SECOND!
Controversy followed when her supervisor (Antony Hewish) and Martin Ryle were awarded the Nobel Prize in 1974 but she wasn’t. I can’t ever recall her making an issue of it, although other prominent astronomers at the time did (notably Fred Hoyle).

Hewish himself must have been getting fairly fed-up being asked about this.

“You know, in the popular mind, she is the key person in the discovery of pulsars,” he says. “I’m totally fed up with it this stupid business that Jocelyn did all the work and I got all the credit, I get fed up with that comment because it’s just blarney, I mean it’s just totally wrong.

“If she’s disgruntled about the Nobel, well that’s too bad quite honestly. It’s a bit like an analogy I make – who discovered America? Was it Columbus or was it the lookout? Her contribution was very useful, but it wasn’t creative. And I don’t think you do get the Nobel prize for that”.

Photo and quote taken from  The Belfast Telegraph

Jocelyn Bell Burnell (Dame Jocelyn Bell Burnell to give her her full title – she was awarded a DBE (Order of the British Empire) in 2007) has done much to promote girls doing Science, and Physics in particular (she is also president of The Institute of Physics).

So it was a little embarrassing that first Aoibhinn Ni Shuilleabhain (herself a physics graduate) and then straight after Ray D’arcy referred to her as Dame Jocelyn Bell Burnett.
Perhaps it was their cue cards.